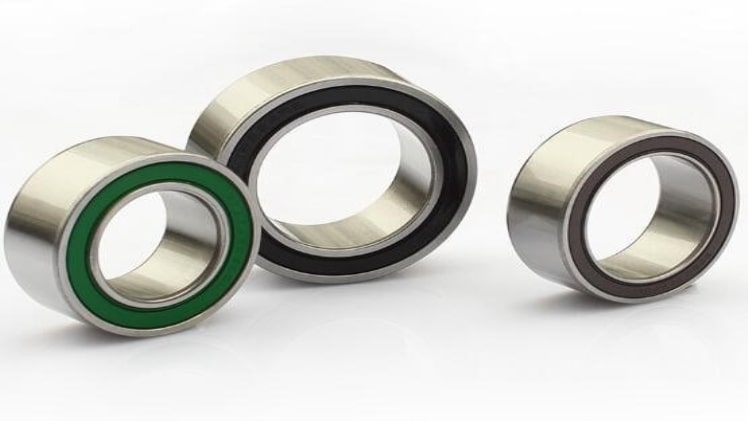 Principle The motion of a rigid body in space includes translation and rotation, with a total of 6 degrees of freedom [9]. The state of the active magnetic bearing described in this paper is to rotate around the main axis, that is, the z direction, so the remaining 5 degrees of freedom need to be controlled, which requires two radial bearings (each responsible for the x, y directions) and a shaft. To the bearing (responsible for the z direction), which constitutes a complete electromagnetic bearing system.

Here, an AC two-degree-of-freedom hybrid magnetic bearing is used as an example to illustrate its working principle [7-8,10]. Figure 1 is a schematic diagram of the working principle of the AC two-degree-of-freedom hybrid magnetic bearing. The working principle of the AC magnetic bearing is based on the principle of a bearingless motor, so that the number of pole pairs P1 of the torque winding is 0, and the number of pole pairs P2 of the suspension force winding is 1, which satisfies the condition P2=P1±1 generated by the radial suspension force. The three-phase power inverter provides driving current to the suspension force winding, so the bearingless motor with this structure actually becomes a magnetic bearing that only generates radial suspension force [8, 10-11]. According to the motor theory, after the three-phase winding is connected to the three-phase alternating current, a rotating magnetic field can be generated to form a unipolar synthetic magnetic flux. When the magnetic bearing is subjected to radial disturbance, the rotor deviates from the radial reference equilibrium position, the position sensor detects the radial offset position x and y of the rotor, and feeds it back to the radial controller, which is in phase with the reference equilibrium position x* and y* After the comparison, the controller calculates the offset x and y of the rotor, and then converts it into a control signal, and provides three-phase control currents ia, ib and 3 to the three radial control coils through the current tracking power inverter (CRPWM). ic, so that the synthetic monopole magnetic flux generated by the control current in the radial three-phase winding can be directed in the opposite direction to the position offset, and the corresponding radial magnetic levitation force is generated to make the rotor return to the radial equilibrium position.

Hybrid Magnetic Bearing (HMB) relies on permanent magnets to provide bias magnetic flux, that is, the magnetic force generated by the permanent magnet supports the self-weight of the rotor, and the electromagnet only needs to provide the control magnetic flux to ensure that the rotor can return to the rotor when it is disturbed. The original suspension position; therefore, its power amplifier is small in size, compact in structure, small in energy consumption during steady-state operation, and low in loss [4, 6, 8-9]. At present, the structure of domestic research is two-piece (3 × 2) six-pole AC two-degree-of-freedom hybrid magnetic bearing [8], as shown in Figure 4. The stator of the magnetic bearing is superimposed by two identical three-phase AC active magnetic bearings, so that there are two sets of control coils (excitation coils), and the two sets of control coils are connected in series respectively. Set the magnetic flux, when there is no external interference and static suspension, the bias magnetic flux can make the rotor levitate in the center position; when disturbed, the two sets of coils are energized at the same time to generate a magnetic force opposite to the direction of the interference force to pull the rotor back to the original position Central location. The main domestic research institution is Jiangsu University. There is also a six-pole AC two-degree-of-freedom hybrid magnetic bearing [14], as shown in Figure 5, by embedding permanent magnets on three of the poles to generate bias magnetic flux; the other three poles are wound with three-phase control coils , when the rotor is disturbed, it is used to control the rotor to remain suspended in the equilibrium position. The foreign research institution is mainly the Korea Institute of Science and Technology.

A magnetic bearing whose magnetic field lines are parallel to the rotor axis is called a homopolar magnetic bearing. As shown in Figure 6. This layout is usually called homopolar magnets, and its hysteresis loss is relatively small, and the rotor may not need laminations [8]. This structure is mainly used in those occasions where laminations cannot be used for the rotor due to various reasons. This structure uses a quadrupole electromagnet, and the differential structure is also used in the two degrees of freedom.

At present, there are only two types of magnetic poles in AC magnetic bearings: 3 poles and 6 poles. Figures 2 and 4 are magnetic bearings with a three-pole structure, and Figures 3 and 5 are magnetic bearings with a 6-pole structure. AC magnetic bearings mostly use three-phase power inverters to provide excitation current to the control coil windings. One three-phase power inverter can completely control the radial two degrees of freedom, and the three-phase inverter application technology is mature, cheap and bulky. It is compact and adopts the vector control strategy, which is easy to program and transplant the control system software, thereby reducing the cost of the magnetic bearing control system as a whole. The three-pole structure is not only easy to realize the centralized control of the rotor radial displacement, but also has the advantages of low cost, low iron loss, good heat dissipation performance, and easy installation of windings and sensors. It is widely used in magnetic bearing systems, bearingless motors, and high-speed flywheel energy storage systems. It has a good application prospect in high-speed motion occasions such as magnetic suspension support.

Hello, I need 8 units of this bearing. Including shipping costs to Florida USA 33166

Getting Started with Excel

How to Recover Old Photos Deleted Years Ago

Tips On How To Make Your Virtual Meetings Successful